This particular female raccoon gave my nothing but problems. She would not get caught or leave. She was running the fascia and soffit area and would not go into the attic(We think its because of the construction of the house would not allow her to go up).

We found where she and her pups were was using a Thermal Camera. 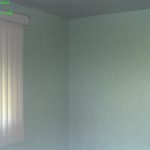 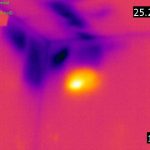 Here you can see the thermal print of the raccoon in the wall between the studding. We think that the raccoon had easy access to the wall cavity due to improper wall sheathing installation, or it just tore the sheathing apart. We knew there were babies because of the sounds they were making. We did not want to open up the wall cavity so we started to stress them with sound.

From out side that wall you can see the thermal signature of the raccoon in the following thermal images. 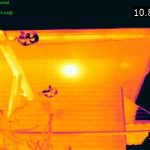 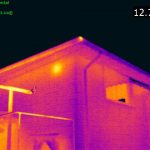 The raccoon is the bright yellow area. 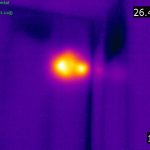 and from the outside she is visible 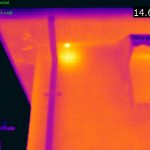 Well we had enough and suggested more aggressive stress. The client allowed us to drill holes through the brick and we injected some commercially available male raccoon urine. The drill holes are evident in the following thermal images. 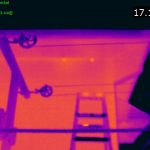 The next day we came back and she was gone with her pups. Installed an animal barrier over the entry point in the soffit and we were done.